Review of visitors to our stand at EuroFinance 2013 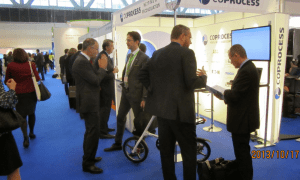 This year's Eurofinance 2013 Conference was held in the wonderful city of Barcelona. We know some of you managed to see at least some city sights and some to bring partners along for a few days during the week or at the weekend. On a previous visit my wife and I did some of the Gaudi sights Sagranda Familia, Park Guell with Gaudi's house museum and grand views and walks, certainly worth walking out at night to The Ramblas. Port Vell, do the aquarium, cable car and funicular railway (we are not on commission to the City of Barcelona!) but if you get the chance, do go. A special thank you to the contingent from Puig, based in Barcelona, the team posed for a photo, chatted about their use of the system… and gave us some excellent tips for local eating.

Four of the Coprocess team attended the conference. It was the first outing for our new stand, designed to emphasise the 3 parts or uses of the Coprocess system, multilateral netting, intercompany reconciliation and payment factory with the 3 part 'lotus flower'? (you decide) logo and backlit. We were pleased to meet so many at the conference. It is great to meet our clients at these events. We also meet companies new to intercompany netting, banks that might want to offer our system to their clients, partners, consultants and so on. Here's some pictures from the event and a few highlights from conversations with visitors to our stand.

Netting savings… too good to be kept a secret

We discussed various problems and the Coprocess solution with a number of companies needing to sort out their interco. We are writing a case study with one of the clients that came to the stand about the savings from multilateral netting. We have a savings report in the system that allows the calculation of savings from netting and takes account of various bank payment fees, FX spreads and float lost in the banking system to arrive at a monthly saving figure. It asks for client input to reflect the likely pricing and payment volumes, percentage of cross border or domestic payments and spreads and from the monthly volume of intercompany, payments saved due to netting and the lower volume of FX at keener spreads, calculates the monthly savings.

There has to be a bit of finesse to the savings figure because we need to know what hedging programme is in place. The calculation takes the before and after case, reproducing the costs which would be experienced based on the payments between subsidiaries with no netting in place and after. FX volumes will be larger prior to netting for example but may already be hedged, however the hedging may not be as accurate before netting as with netting in place. Also due to differences in settlement dates of payments before netting we have to capture the savings from the mis-timing of payments and inefficiency in the hedging process that this causes. This client has a headline saving of EUR30m per year, which doesn't include savings due to time and inaccuracy in the invoice process, which netting can also address.

Comprehensive configuration, the key to a simple user interface

The Treasurer of a company who has recently decided to take the Coprocess.Netting system came to meet the rest of the team and see the system again. Andrew gave a demonstration and started to discuss business requirements, current settlement issues and ask the client what the perfect netting process would look like. This is part of the consultation process, either conducted during face to face meeting or remotely via conference call and screen share etc that takes place as we gradually come to a solution. There are a great many variables such as payable or receivable driven netting, remote or central upload, which systems we will integrate to and from, which banks are used for settlements or whether some subsidiary companies will use cashless settlement, countries to include and in what order of priority, should matching be used, what will be the agreement process and a great many other switches that can be set. These parameters can be changed in the software to reflect the ideal netting process. Since every company runs netting in a different way these changes are stored as parameters in configuration and Coprocess implementation staff will help the client configure this during the implementation and testing phase.

Another client came to us to ask about netting regulations in various countries. In this case they were interested in our knowledge of netting in India. We hold a database of such information and are in touch with some of the clients that are active in many countries around the world to keep this information current. We will shortly be announcing a major initiative to help our clients in this and many other areas of netting knowledge. We are very excited about this and very keen to make this information available to the more than 10,000 users of Coprocess.Netting around the world.

When it comes to technology a year is a long time

One of the problems of having a great previous version of a system is asking clients to move to the latest version. Not a problem once we have clients on our web based version and running on our shared hosting environment, as upgrades happen largely without the clients being aware of it. We have thoroughly tested the latest release in development and test environments before it gets near to production and before we upgrade we send out a 'What's New'. If there are changes specifically requested by clients they will have been involved in the design and test of the system before update too. Our previous version though was just as reliable as the new version and installed on a client hardware (or we could host) and it continues to work well. However, as we all know the world moves on and the tools and source libraries etc become obsolete. Although the software still works well it cannot be changed or maintained. One of the clients who came to see us is looking to implement some new processes in the netting, functionality which we have built in the new system which was not available in the old. Our MD, Andrew, gave a demonstration of how the process the client needs would look in the Coprocess.Netting system and we discussed whether the client would like to run the software on their local servers or use our SaaS model. Our hosting, because it is purpose designed for netting, the architecture is designed for scalability and for the peak demands netting places on the hardware at month end. It also comes in at a fraction of the price likely to be charged by the company's IT department for hosting. If choosing our hosting there is no software licenses or hardware to buy, just one yearly fee and only a 12 month commitment. We still have some clients left on the old multilateral netting system, we encourage them to migrate to the new platform periodically but appreciate that this involves work for them. Even when, as we do, we migrate the data for the client, arranging conference call training sessions for the subsidiary companies and training for the netting centre. Eventually however the old system will no longer work with the latest versions of the server software. Microsoft and other industry providers do not and cannot stand still, much as we want them to, as new efficiencies come with new hardware and software.

Visibility over all group intercompany invoices

A current netting client asked us about the inclusion of all their subsidiary companies into the netting, those that can settle along with those that cannot. The value of including all subs in the clearing are many, the visibility brought to the whole group transactions, cash flows, reconciliation process and more. The netting system already has various functions to accommodate restricted country and currency regulations by participant and now these additional transactions will be for information only, included in the matching process but not settled in the system. They will not be included in the FX worksheet or in settlement files sent to the bank or the usual net position statement sent to all subsidiary and third party vendors by email.

White labelling: All of the system, none of the hassle

We are always pleased to see some of the banks come to our stand. We offer a white label version of our netting system to banks to allow them to offer a netting system or service to their clients. They want to meet client demand but are aware that any specialist system such as netting is difficult and expensive to build in-house. Indeed why would one do so when a netting system that has just about every feature one would need for netting (and is always incorporating the latest thinking) is available to buy or rent today.

Companies in various stages of thinking about netting, from running netting today on their in-house system, with other providers, on spreasheet to not running any netting, come and chat about various netting issues and we are always pleased to hear about their current netting process or problems. Our system after all, may well already address the issue or it may be a suitable candidate for including in the next version. All in all a good lively conference for us and we hope to see you in Budapest in 2014.