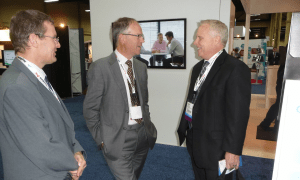 What can we say! The AFP conference is truly vast, something approaching 6500 delegates. The hall is vast, the number of exhibitors staggering, just the logistics involved in the catering always amazes. This year in Las Vegas there was definitely a relaxed air, maybe it’s the location, maybe it’s the conference centre, which though a huge anonymous block from the outside was made quite welcoming on the inside, partly because it was accessed via a walkway under the Mandalay Bay hotel.

We are not sure why we had so many visitors to the stand but with over 120 conversations on the stand and many off at other exhibitors’ booths and Consultants we met walking the aisles, it was the busiest conference we have attended. The team of 3 were kept busy, we gave several demonstrations of the system. We had lots of interest in the bike prize draw. Odd perhaps for a country with so few cycle lanes? If there was novelty value we didn’t see it, everyone was keen to tell us their biking story and enter the draw.

Many of the themes we discuss are similar, as to be expected, we talk to the same Treasury type people and they have similar issues with Intercompany, at each of the conferences. So there is less detail below than in the Eurofinance review elsewhere in the blog. We keep our attendance to these events under review they are expensive and time-consuming but after our experience in Las Vegas we will definitely book for Washington DC next year. Here is a few highlights of the conversations and some pictures of the event.

Centralisation: Visibility, automation and settlement discipline, value even in a single currency environment

It is quite possible the multilateral netting system is the only shared platform where all payable and receivable invoices can be seen. This necessarily has the effect of centralising visibility of information to the netting centre. A visitor to our stand in the healthcare industry gave us a puzzle, how to centralise settlement for the 135 hospitals in his company’s group. Normally the value of netting is increased considerably because of the reduction of foreign currency volumes. However even in a USD only scenario we have 2 solutions, either would help centralise payment and bring discipline to the settlement process. Depending on the volume of invoices and automation/system at each hospital it would certainly be possible to use the netting system for payments within the group and to 3rd party suppliers. Where the number of invoices is large then an extract from the ERP of all if the information necessary to make the payment is the way to go. Our payment factory or vendor payments module would allow the sending of a single settlement amount on behalf of the whole group to any supplier. They would receive one settlement amount, an advice and a file of paid invoices. This would allow the hospitals to keep their local buying but settle centrally. This would encourage many good behaviours, settlement on time, better cash management, automation of payment, better security and segregation of duties, maybe the ability to consolidate on certain suppliers. Coprocess.Netting would output a file of payments in chosen format, perhaps ACH and export files of journals for example to update the accounting. As a next step perhaps the hospital central administration could perform the bulk buying of supplies for the whole group and centralised payments. Certainly a netting system could help in the first phase.

But there’s enough similarity that we can build a system with core functionality and then change its behaviour at the company level, the subsidiary level and the country, currency and legal entity level through the use of configuration parameters. Several companies came to the stand to discuss netting, one had over 400 subsidiary companies, many of them international and wasn’t running netting today. The Coprocess system has settings to allow accommodation of local country and currency regulations so we could offer a solution for Asia countries, Middle East, Central and South America as well as non-regulated countries, most of Europe, North America, Australasia. The ability to change the way the system behaves without coding is very important, not just to give ideal solutions to companies that don’t run multilateral netting today that need a flexible solution but when it comes to replace other systems. Several visitors to the stand were running netting today, some had written in-house systems, some were with banks, one was left using a discontinued system and is looking for a solution next year. One thing we note from the in-house, TMS and ERP solutions, we find the client has to do a lot of work, time and energy go in to designing and writing the system. The results are not always that wonderful either. Since our system works ‘out of the box’ and is quick to implement we offer the system with a trial period, coupled with our hosting this gives a risk free way of seeing our software working for your company.

Several companies were interested in the reconciliation aspects of our system. We have always encouraged clients to use matching. The upload of AR and the matching upload of AP, this helps to sort out the ‘intercompany mess’ and reduce stress levels at month end. We have been working on our intercompany reconciliation system lately the product roadmap, which we will work towards over the next few releases of the system, reinforces this move towards cleaning up the ledgers and giving more accurate numbers in the P&L and Balance Sheet.

This was probably our busiest event ever. Good to see so many companies with an interest in netting and reconciliation, customers, partners and potential partners.